By Mike VotavaMarch 16, 2022March 19th, 2022MJV Living
No Comments
ShareTweetSubscribe to My Newsletter 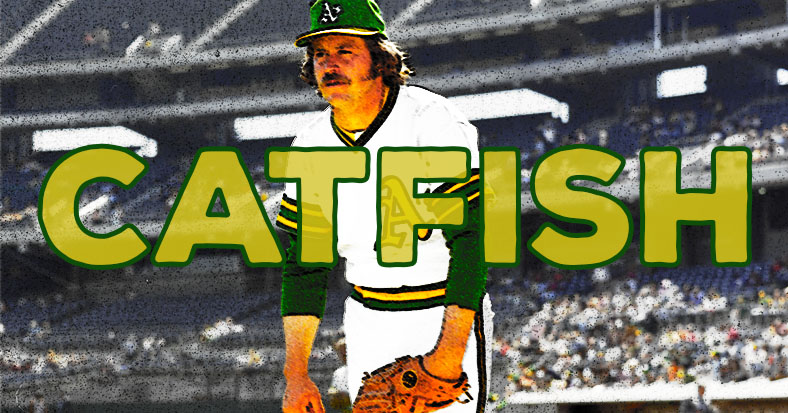 I’m in a sports book club with a few friends. It is like a regular book club, except we only read and discuss books about sports.

The book selection this time around is Lords of the Realm by John Helyar. It’s a long and interesting book about the evil business that operates behind Major League Baseball.

My favorite chapter so far was about Catfish Hunter and free agency. Here are a couple of things I learned.

I had no idea that was his name. Catfish is so much cooler sounding than Jim.  It’s one of the best nicknames in all of sports.

Do you know why they called him Catfish? I always thought it was because he looked like a catfish. Am I wrong?

In 1964 Hunter, then a high school pitching phenom, was recruited by Charlie Finley, the owner of the Kansas City Athletics. Finley’s thing at the time was that every recruit of his had to have a flashy nickname.  So Finley cooked up a story about how as a child Hunter got lost in the woods. When he was finally found by his parents a few days later, Hunter had a bunch of catfish in his arms. Or so the story goes…

In reality, the story of getting lost wasn’t true.  But I guess it didn’t matter to anyone. Everyone just went with it. From that point forward, Jim Hunter would be known only as Catfish Hunter.

Back in the day, Baseball had no free agency. Instead, they had something called the reserve clause in every contract. The reserve clause made it so that the team owners still owned the rights to a player even after that player’s contract expired.  So even if a player wanted to play for a different team after their contract was up, they couldn’t unless the team owner allowed it. Team owners had full control over player movement.  The players had very little say in the matter.

A big chunk of Lords of The Realm is about how the players and the newly formed players union slowly wrangled power away from team owners.

In 1974 Catfish Hunter was at the top of his game. He was the best pitcher in the league. He won the Cy Young award for pitching excellence. And his team, The Oakland Athletics, won their third straight World Series.

Catfish was still under contract with the A’s. But for reasons I can’t really remember right now, Finley (still the A’s Owner) refused to pay out a portion of Catfish’s contract. Because of this oversight, the reverse clause was voided, and Catfish Hunter became the very first free agent in Major League Baseball.

Now that Catfish was a free agent, he was free to sign with any team he wanted. Catfish set up shop in a small town in North Carolina (I think?) because that’s where his lawyer lived. One after the other, MLB team owners paid him a visit, tried to convince him that he should sign with him.

At the last moment, newly appointed owner of the New York Yankees George Steinbrenner swept in and made Catfish an offer he couldn’t refuse.  Catfish signed with the Yankees on a five-year contract worth more than three million dollars.

I did not know that. That’s some wild and wacky stuff. Ol’ Georgey Boy originally wanted to uby the Cleveland Indians. They weren’t for sale.  So then he went out and bought the Yankees instead.