By Mike VotavaOctober 25, 2013November 2nd, 2013music, We Wrote the Book on Connectors
No Comments
ShareTweetSubscribe to My Newsletter

Look what I got in the mail yesterday… my very own copy of Ball of Wax 33.  Squeeeeeeeee! And guess who has two thumbs and has a song featured on the album? That’s right… this guy right here.

For those of you who don’t know Ball of Wax Audio Quarterly is a Seattle music compilation project created by Levi Fuller that was started way back in 2005. Every quarter (yes, 4 times a year) Levi reaches out to local artists and asks for music submissions. Sometimes there is a theme, and sometimes there is not. He then hand picks his favorites, smashes them together on a CD, creates the artwork, and WALA! …he’s got himself an album featuring new Seattle music that for the most part, can’t be heard anywhere else. Each release of Ball of Wax is celebrated with a live show with performances by acts featured on the album. Pretty cool, eh? 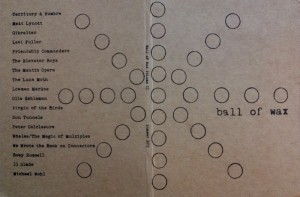 So this time I around I said “What the heck” and submitted for Ball of Wax consideration an old We Wrote the Book on Connectors tune I wrote called Captain Dog. When recording the track I got some help from my WE bandmates — Ben Baier on electric stand up bass and triangle, and Rick Weber on drums (What a jerk!) — and some extra special help with guest performances by Jeff Grant (M. Bison) on lead vocals and Galen Green on piano and flute. I love this song and I guess Levi thought the it was great too. So now Captain Dog will forever live on in infamy within the musical confines of Ball of Wax Volume 33.

The packaging is pretty cool. Ball of Wax 33 comes with a little booklet that contains liner notes about each track written by the artists themselves. Not to give too much away, but this is what I had to say about Captain Dog:

This song originally came about from The We Wrote the Book on Connectors Song Writing Service, a service WE offered to fans where for the very low price of $18 I would write/record a song about anything of their choosing.  At the time I was getting a lot of requests for songs about dogs, which was annoying. So for this song, in an effort to make things a bit more interesting for myself, I decided to kill off the dog in the first line of the first verse. The tune turned out really cool (special thanks to Jeff Grant for laying down that awesome vocal track, and the talented Galen Green on piano and flute), and the person who ordered the song loved it. But they also said it was tough to listen to because it made them too sad. Then Captain Dog died for real about six months later and I felt bad.

I am pretty pumped about this whole thing. I recommend you support the Ball of Wax project by purchasing your copy of Ball of Wax Volume 33 today. You can buy a digital or physical copy directly from the Ball of Wax Bandcamp page. It is cheap, only $4.

Furthermore, Levi is currently taking submission for Ball of Wax 34. This time around it is waltz themed. It is a shame I don’t know any waltzes. Visit BallOfWax.org for more details. But Hurry up, I think the deadline is almost upon us.