Here is a new song I wrote this week. It is called “Another Day”.

Before you listen to it, I thought it best that I warn you. This one is a bit of a downer.

I’ve been trying to write songs that are different than the ones I might usually write. And I’ve been feeling down lately. That delicious combo of circumstances put me in the space to write “Another Day”.

The song is about dealing with the feeling of guilt that comes when you feel like you haven’t made the best of each day.  Left unchecked, the guilt can spiral out of control, leaving you stuck in a not very fun place.

I don’t know if the song is any good or not. You can decide that for yourself after you listen. I do know, however, that I’m glad the song is outside of my brain, freeing me to move on to something else. So I’m calling it a win!

I would appreciate it if you gave it a spin.

This song took me a whopping six full pages in my notebook to work out. And here are those pages now. Good luck trying to read my handwriting. 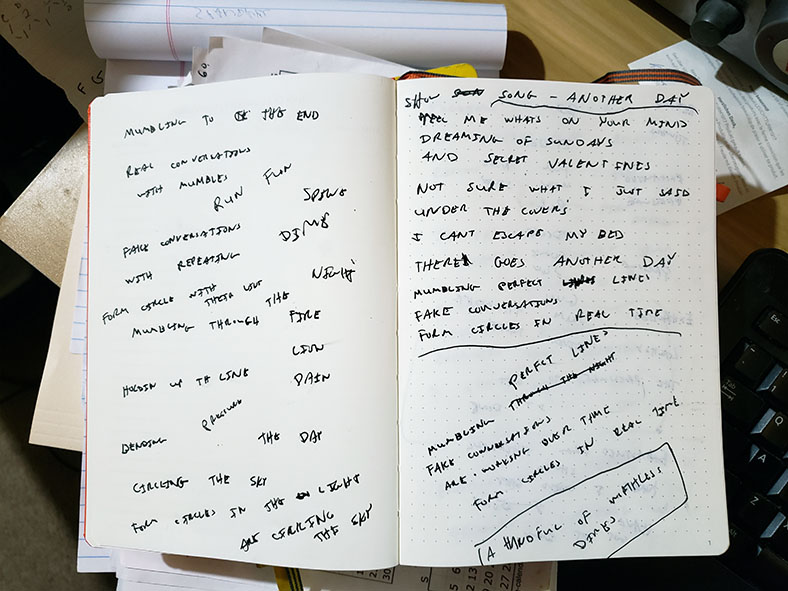 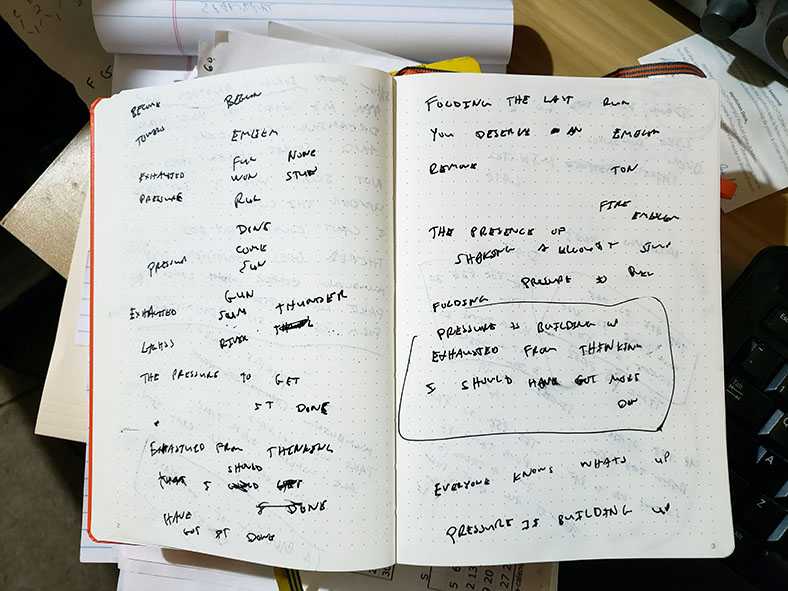 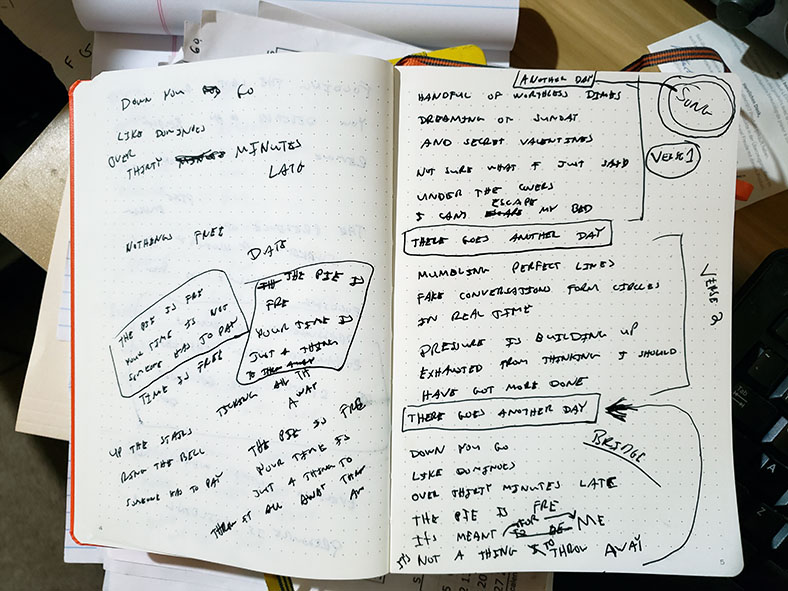 Welcome to The Andy Zone

When I talk about The Andy Zone, I’m not referring to Dr. Andy (durrrrr!). The Andy Zone is all about the Canadian singer/songwriter Andy Shauf.

Anyhow, there I was at the Tractor.  The showroom was full, with about 85% of the audience being of the lady variety. A very quiet Andy Shauf was on stage playing his very quiet songs. I had no idea a rock band could be so quiet. The amazing thing is that the music seemed to get quieter as the night went on.  All the while the audience was silently listening, fully engaged in what was happening. All the ladies were swaying to the music in a trance-like comatose. And that swaying trance-like state caused by impossibly quiet music is what is known as “The Andy Zone”.

A good life lesson I learned that night is that if a lady is in The Andy Zone, whatever you do, do not make a sound. Nothing but total silence is acceptable in this situation. Unwanted noise, especially the kind that might come out of your mouth, will cause the lady and all the other nearby ladies to momentarily break out of The Andy Zone. At that moment, together they will throw massive amounts of concentrated shade your way with a force so terrifyingly powerful it will scar you for life. Never interrupt a lady who is in The Andy Zone. You have been warned!

What does The Andy Zone have to do with my new song? I will tell you. I’m using that story to seamlessly segue into me telling you about the Andy Shauf Tape Op Magazine interview that I read recently. The Andy Zone part was the interesting hook I used to get you to get your attention, in hopes that you will keep reading through to the boring part that immediately follows. I’m a regular Malcolm Gladwell!

In the interview, Andy Shauf talks about his songwriting process. He mentions how sometimes he needs to work through an idea in order to move on to the next thing, even if that idea is bad.

The songs weren’t quite finished, and it was a lot of wasted time trying to get ideas. I would be searching for an idea, and everyone in the room would say, “This is a bad idea.” I’d say, “I know this is a bad idea, but I have to get through it to get to the next thing.” It was painful.

That’s how I felt about working on “Another Day”. I don’t like the song very much compared to others that I’ve made recently. It wasn’t that particular fun to work on or record. And I’m generally kind of embarrassed to be singing songs like this. But for whatever reason, I had to get through it before I could get on to the next thing.

Hopefully, the next song will be more fun.

Is that Another pizza reference?!! Come on!

I somehow managed to include a pizza reference in this song. Here’s the bridge:

Down you go, like Dominos
over thirty minutes late
the pie is free
it’s meant for me
it’s not a thing to throw away

Originally I was thinking along the lines of traditional dominos, the kind that you set up and knock down, each one causing the next to fall. BORING! A savvy song listener such as yourself could have seen that cliché coming from ten billion miles away.

I threw a pepperoni-shaped curveball at you. I turned into a pizza thing.

I think it still kind of works for the song because of the implied “time” elements.

“Thirty minutes late” is the obvious one.

“The pie is free” is a little less obvious. The keyword here is “free”. That’s a word often used when describing a person’s time, for example: I’m unemployed so I have a shit ton of free time on my hands.

And the dude in the song feels bad about “throwing away” all his “free time”.

Does that make any sense? It does to me. Though, I know what you’re probably thinking…

Get the fuck out of here with that pizza reference bullshit! Fuck off!

Another Day
by Mike Votava

Down you go, like Dominos
over thirty minutes late
the pie is free
it’s meant for me
it’s not a thing to throw away