Mike Votava is an artist and songwriter based out of Seattle. He’s been putting music and art stuff out into the world for over twenty-five years. His songs are generally of the “rock” variety — interesting, catchy, clever, and well-put-together. People seem to like them and so will you.

Mike has written hundreds of songs and rocked hundreds of shows. He performs solo. He is also the frontman for his band Mike Votava and The Ding Dongs.

Mike Votava and the Dings Dongs latest album is “Eat A Hot Dog”. It is quite good. I should know. I’ve heard it.

I ROCK THEREFORE I AM 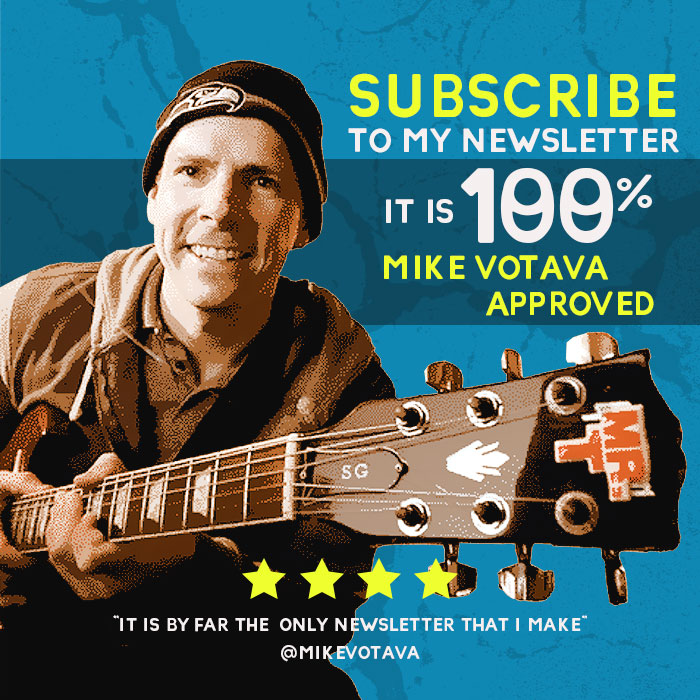 Subscribe to my newsletter to get the good stuff delivered to your inbox every Friday morning.

No spammy spam. It’s free. Unsubscribe whenever you want.

What the folks are saying…

“To hear a Mike Votava song is to find yourself wanting to call him up immediately and bypass the whole “getting to know you” thing and go straight to hanging out and laughing about life’s ridiculous inanities.”

MIKE VOTAVA AND THE DING DONGS

Coming at you like a hot dog out of hell

Eat A Hot Dog is available at all the places!

THE LATEST FROM THE BLOG

Folks Are Always So Busy

I’m not too busy to share some thoughts on being “too busy”.

END_OF_DOCUMENT_TOKEN_TO_BE_REPLACED

I made a poster for the big upcoming Mike Votava and The Ding Dongs show at Darrell’s Tavern.

END_OF_DOCUMENT_TOKEN_TO_BE_REPLACED

New Song: Do Not Be Afraid

This is one of the first songs I’ve ever written.

END_OF_DOCUMENT_TOKEN_TO_BE_REPLACED

I wrote a stupid letter to Arnold Schwarzenegger.